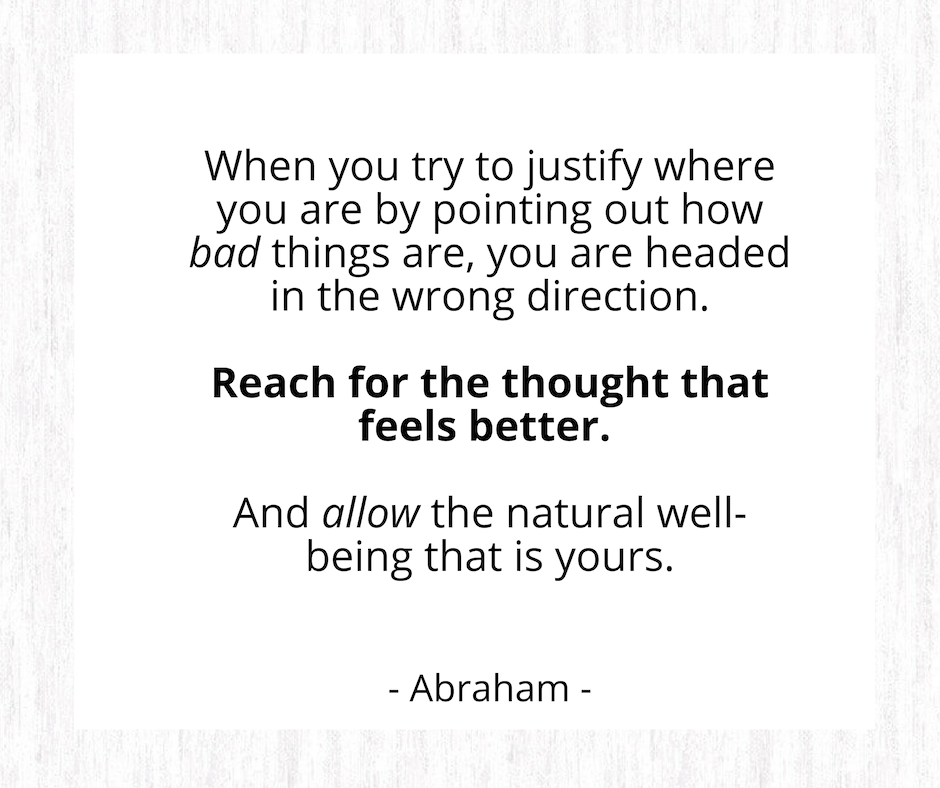 It’s now very well reported that the connection exists between our mind and our body.

And that our way of thinking reflects our overall health generally.

When you’re thinking positive thoughts (which leads you to feeling more positive), your body responds with better health.

This has led to an outpouring of ideas from all over the planet of HOW to stay positive, how to train your mind to think positively so that you feel better mentally, emotionally and physically.

Have you ever tried doing this?  Thinking positively?  Looking for the “silver lining” in every situation to help yourself feel better?

And have you ever been travelling along very well ….. thinking positively, feeling good ….. noticing that your life seems to finally be coming together in the way you’d like ….. and then for some reason….. seemingly out of the blue ….. things start to go wayward…. situations start beginning to happen that cause you to feel that you’re losing your control again, that things are going downward once more?

In a situation like this, have you ever heard yourself say something like “This positive thinking, it’s a load of nonsense…. WHY is all this stuff happening when I’ve been TRYING really hard to be positive & looking for the bright side?”.

And on it goes.

Maybe you recognise that happening for yourself.  Or perhaps you might even know someone who has gone through it.

What’s going on here?….. and what’s the answer?

Maturing – which way do we go?

From the events & situations we experience in life we begin to form our own belief systems based on how we “see” the world and the people in it (including ourselves).  We also begin to pick up beliefs from the people around us about ourselves and how things generally go in life.

Many of these beliefs can be very helpful and can enable us to have faith in ourselves and in our ability to live a very happy and successful life with fabulous relationships all round.

If we create healthy, positive beliefs systems about the way life works and nurture our “knowing” that we have the ability to draw on our own positive, empowering & strengthening resources within ourselves to create our own happiness, we find that life is easy ….. we feel empowered…. and if our belief systems are all positive, it’s natural that we would feel that way.

Don’t doubt it for a second….. Our beliefs are STRONG & they are POWERFUL !

People with positive belief systems have been able to achieve and accomplish tremendous things in life……. because they believe they can!

It’s those “other” belief systems that need our attention right now….

What if ….. during the very early years of your life, the people that surrounded you had their own negative belief systems that they lived by?

What if ….. what you decided to be true about yourself & about life was based upon what you witnessed as these people repeated their negative words & actions.

What if you began to believe that what they believed and said was true for you as well?

What if, for example, the people around you had beliefs such as “People like us don’t get ahead in life” and you heard that so many times that you began to believe that about life as well.  Or imagine if you were constantly exposed to the words “You just can’t do anything right, can you?”.  Or what if you were having a challenging time with your weight when you were young and kept telling yourself “I’ll always be overweight” so often that it became your absolute belief?

How do you think that would impact on your adult life if you held onto any of those beliefs?

But We Need To Check In & Think About Those That Are NOT Helping Us !

Negative beliefs which you still hold onto but which no longer help or serve you (such as those few mentioned above) can have a massive impact on how you relate to yourself and others in your adult life.  They can permeate into every single area of your life; restricting your growth, limiting your self development and your ability to be and feel as incredible as you otherwise could.

Relationships, family, health, money, career, artistic endeavours…..every area of your life can be affected.  You only have to take a moment to reflect on where you feel stuck right now to begin to understand where some negative belief system may be playing out for you.

In what area of your life has change been difficult to make?  What is it that you would love to Do, Be or Achieve that just seems unobtainable for you no matter how hard you “try”?

If you want to make a change in your life ….. if you have a desire to move forward ….. all the positive thinking in the world may not be enough if you have an underlying negative belief system at work which is not in line with what you want for yourself now ….. a belief system which actually opposes what you would love to be experiencing right now.

It may be a negative belief system that you’re not even aware of right now, one that you formed many years ago but is still a part of you, still at work within you.

To use an example from above, if the desired change was to become thinner, a positive approach to your diet and a positive attitude towards what you would like to achieve will serve you wonderfully ….. until the strength of the old belief system comes up to “haunt” you once more, seemingly dragging you back to where you where before.

Although the example may not apply to you exactly, can you relate to that sense of not having the “strength” to follow through on something you wish to change?  Negative Beliefs……  They are STRONG…. and they are POWERFUL !

So… what happened to all those wonderful qualities I spoke of before??? (see “How I Can Help You” )

By questioning where your negative beliefs may lie and why they are there, you can begin to work out if they’re serving you right now in your life, or if it’s time to find a way to release and let go of them and move forward.

During a healing session I will always investigate what negative belief system is holding you back from rediscovering your Brilliance.  I explore the negative thought pattern that’s preventing you from moving forward in the way that you’d like.  With the techniques I use this can be done easily & effortlessly….. It’s all about the questioning.

Simply by becoming aware of what the negative belief system is and how it’s evident in your life today brings great clarity, and once it’s been identified it’s ready to be released.  I help you release the negative thought patterns and beliefs in the same way I do with negative emotions; using the powerful healing ability of magnets to cancel and dissipate the negative energy of these out-dated beliefs from within your body.

When you remove a “layer of dust” of negativity you’re no longer carrying that around with you.  You will rediscover your shining light, so to speak.  When you have better access to this part of you that is positive and empowered, and you’re able to draw on those positive qualities easily and naturally, the need to “effort” to stay positive is much less.  You will have eliminated the previously held negative belief which was preventing you from maintaining your resolve to change.

Once you’re “clear” from the negativity, being positive is just a natural state that you feel, an effortless way of being ….. not something that you have to try to make yourself be in order to feel great & be healthy.

Gmail & Yahoo Users, Please Check Your "Promotions" Tab or "Junk Mail" Folder - In Case It Lands In There !

You Have Successfully Registered ! Check Your Inbox For Access Details.

This is the footer text.